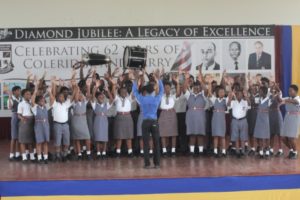 And it is definitely true that a beacon on a hill can never be hidden! For over 13 years, this St Peter institution –– which just happens to be my alma mater –– has been making strides on the NIFCA stage with its melodies, singing, pitch-perfect harmonies and impressive calls and responses.

Under the direction of Marlon Legall, the Coleridge & Parry Choir has achieved gold, silver and bronze medals throughout the years, definitely becoming the envy of many a singing group across the island.

This year for NIFCA, the Coleridge & Parry entered seven pieces –– two by the choir itself, one by the girls’ group, and the others by individuals representing the school. Of the seven, four advanced to the finals, receiving one silver and three bronzes. The CP Choir also gets the enviable opportunity to perform its piece Parumpapumpum at the NIFCA Gala on Sunday, November 22.

Choir director Legall revealed Parumpapumpum was written out of fun, and that Coleridge & Parry was pleasantly surprised at the overall response to its 2015 entries.

“The experience so far for 2015 has been great. The reviews so far have blown us away. To be honest, we were just making sure our strategies were correct.

“We entered those prospective music students to CXC and it is a matter of getting them the experience on the NIFCA stage. We didn’t anticipate, however, the responses would have been as great as they were. And we are happy for that,” he said, adding that the choir was in the process of recording its other piece From The Pavement To The Catwalk for a documentary they were approached about.

But just what is the strategy for producing an award-winning choir year after year? Legall opened up and let a few of the secrets out the bag. I’m sure some will surprise you. The main secret to being so good year after year is founded on principle and a being a strong family unit.

“The strategy so far for me has been passion; love for what we do; and I think the other secret is consistency. These children, they want to sing. They want to be a part of something.

“I’m to the point now where I don’t call rehearsals. They stop after school and tell me they are going to practice. Because the passion is there now,” the young choir director said.

And to show how much of a family unit they are, the choir has now formed a Coleridge & Parry Choir parents committee, which Legall said had made his job “so much easier”.

“When we turn up for an event at NIFCA, or anywhere at all, our parents are there with fruit cocktails, lemongrass tea. About seven or eight parents are there to chaperone, to give anyone a ride home if need be. It’s become a network and a family now,” Legall explained.

And joining this family is not as hard as one would think, although there have been instances where some were turned away because the numbers were simply too big.

He then explained the audition process for those who are curious.

“Auditions are simple. There is no advertisement that there are going to be auditions. There is no ‘hey, come sign up for the choir’. I just sit at the piano at lunchtime get one person to come sing for me and I grab another and the ecology happens there.

“I found that the key to maintaining that strength and unity and longevity has been that ecology. The kids join and they have friends, and they
make bonds.

“Then we polish. We go into the more technical side of things. We sing and have fun, but then eventually we work on blend and diction harmonies. Then we go forward from there.

“Section leaders then come into play. Because the numbers are so large, it’s kind of difficult for me to blend everyone. I would be lying if
I said I do it all myself. I simply look for the most disciplined in each group, and we put them in charge and we delegate the work like that.

“We hold the rehearsals separately first, and if I think we sound half-decent, then we bring them together. We have a very structured way of rehearsing,” he explained.

Apart from that, Legall says he chooses prospective singers from among his music classes. He is proud of how far the choir has come over the years.

On a personal level, “on a hard day looking down at 60 or more smiling faces that look up to you is a great feeling and awesome therapy”, Legall admitted.

“It’s been a humbling experience and it has taught me so much patience. I have also learnt so much from them that transcends music. It’s human relations, it’s being a shoulder, an advisor, a confidant, being the person to share you disappointments with through music,” he revealed.

He recounted some of his best memories with the choir, some of which were how the choir really pulls together as one during a tragedy, as the choir has lost some of its beloved members along the way, the most recent being the late Karim Busby who died tragically in a car accident.

“For me it reminds you of the value of life and the gift; and the way we come together when one of us has fallen. Our very latest being Karim Busby, as well as Barrio Braithwaite. We pull together and characters are molded, characters are built,” he said in a reflective tone and with evident sadness.

Legall said some other memorable moments have been “seeing faces lined up on the outside watching thinking, ‘Would I ever have that opportunity?’, and going on the little choir picnics and to the little dinners we hold every now and again, where they finally get to forget that I am Mr Legall, and just have fun. Those times are really touching to me”.

And NIFCA isn’t all the choir is about; it has been heavily requested at many events across the island.

“Christmas is coming up right after NIFCA, and we tend to do one or two annual gigs around the island. We have built a relationship with several of the hotels along the West Coast, and we try to keep it very minimum; but at the same time we want to keep the engine moving; but we take one or two during the Christmas break.”

Long term, Legall told Bajan Vibes he was looking to take the choir’s music and the Coleridge & Parry music programme to the world.

“My tenor boys said to me –– Zari in particular, ‘Mr Legall, I joined the choir so that one day I can go away and perform’ . . . . So we are looking to travel in the future and share
the music programme. Just as other schools have visited from abroad,” he added.

And in the words of our school motto, Palmam Qui Meruit Ferat –– Let They Who Excel Receive The Prize!